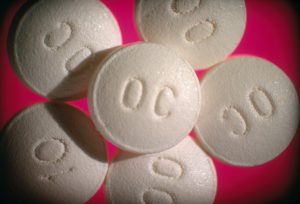 More than half of all opioid prescriptions in the United States are written for people with anxiety, depression, and other mood disorders, according to a new study that questions how pain is treated in this vulnerable population.

People with mood disorders are at increased risk of abusing opioids, and yet they received many more prescriptions than the general population, according to an analysis of data from 2011 and 2013.

“We’re handing this stuff out like candy,” said Dr. Brian Sites, of Dartmouth-Hitchcock Medical Center, the senior author of the study. Opioid prescribing in the U.S. quadrupled between 1999 and 2015, and during that time over 183,000 people died from overdoses related to prescription opioids, according to the CDC.

Sites said more research is needed to understand whether opioids are being overprescribed to adults with mood disorders.

READ MORE: Treating patients with opioid disorders is not just about treating addiction. Here’s why

“If you want to come up with social policy to address the need to decrease our out-of-control opioid prescribing, this would be the population you want to study, because they’re getting the bulk of the opioids, and then they are known to be at higher risk for the bad stuff,” he said.

The study, published Monday in the Journal of the American Board of Family Medicine, tapped a U.S. health survey that gathered data from providers and facilities on prescription medications, health status, and basic demographics for about 51,000 adults. It found that 19 percent of the 38.6 million Americans with mood disorders use prescription opioids, compared to 5 percent of the general population — a difference that remained even when the researchers controlled for factors such as physical health, level of pain, age, sex and race.

The analysis showed that adults with mood disorders receive 51 percent of the opioid prescriptions distributed in the U.S., some 60 million prescriptions a year.

For Sites, the bottom line is that while opioid prescriptions can be appropriate for individual patients with mood disorders, the study raises concerns about overprescribing on a population scale.

“We need to understand if this massive prescribing level is appropriate in actually providing benefit commensurate with the risk,” said Sites, who collaborated with researchers at the University of Michigan.

READ MORE: Your mind can be trained to control chronic pain. But it will cost you

“We don’t have the ability to refer and recommend those things easily,” he said, “So the easiest thing right now is to prescribe a pill.”

Jeffrey Scherrer, a professor and epidemiologist at Saint Louis University not involved in the study, was not particularly surprised by the results. “A lot of pain patients attribute their depression to their pain, but there’s a lot of evidence that depression is playing a role in both the experience of pain and the odds of getting an opioid,” he said.

For Dr. Mark Edlund, a senior public health analyst at RTI International who was also not involved in the study, it adds to a growing and worrisome body of evidence that people with mental health disorders who are at higher risk for abusing opioids are also more likely to receive opioid prescriptions.

“There’s an emphasis now on cutting back opioid prescribing,” he said. “Probably just as important is assuring that we’re prescribing the opioids to the right populations, and that we’re doing our risk-benefit analysis on each patient.”